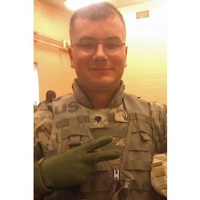 Cory was born February 3, 1989 in Independence, Missouri to Billie J. Ward. He was a lifelong student, graduating from Joplin High School in 2007 and was continuing his education at Missouri Southern State University. Cory served our nation in the U.S. Army during Operation Iraqi Freedom.

Funeral service is planned for Wednesday, November 29 at 10:00 a.m. at Parker Mortuary Chapel. In lieu of flowers, memorial contributions can be made to The Wounded Warrior Foundation, in care of the mortuary.

Arrangements are under the direction of Parker Mortuary, Joplin, Missouri.
Posted by Randy at 4:57 PM