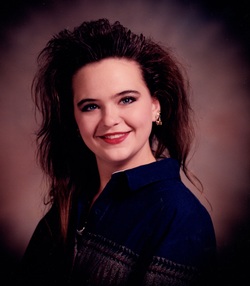 Mandi Makayla Pendergraft, 41, of Stilwell, Oklahoma, formerly of Stella, Missouri, departed this life on Saturday, December 22, 2018, at her home after a recent decline in health.

Mandi entered this life on January 18, 1977, in Monett, Missouri. She was raised in Jay, Oklahoma and was a 1995 graduate of Jay High School. She resided several years in Southwest City, Missouri and Gravette, Arkansas, before moving to Stella, Missouri, nine years ago. She worked as a CNA and later as a meat butcher. She enjoyed fishing, camping and caring for her animals.

He husband, Dwight Edgmon, preceded her in death.

Mandi is survived by her three sons, LCpl. Rex Lemonds, USMC, Donny Joe Lemonds and Eric Lemonds all of Gravette, Arkansas; her parents, Bobbi and Allen Parris of Stilwell, Oklahoma; her father, Randall Pendergraft of Washburn, Missouri; two siblings, Rob Pendergraft of Stella, Missouri and Brandy Phillips of Stilwell, Oklahoma; several nieces and nephews as well as a host of other family and friends.

Funeral services for Mandi will be held graveside on Thursday, December 27, 2018, at 11:00 a.m. at the Union Cemetery near Stella, Missouri, with Pastor Melvin Stapp officiating. Those honoring her life by serving as pallbearers are Rex Lemonds, Donny Lemonds, Eric Lemonds, Danny Phillips, Steve Horton and Daniel Horton. Logan Pendergraft, Trenton Pendergraft and Skyler Pendergraft will be serving as honorary pallbearers. The family will receive friends on Wednesday evening from 5-7:00 p.m. in the Southwest City Chapel of the Ozark Funeral Homes. On-line condolences may be sent to the family through our website, www.ozarkfuneralhome.com.

Arrangements are under the personal care and direction of the Ozark Funeral Home in Southwest City, Missouri.
Posted by Randy at 11:26 AM