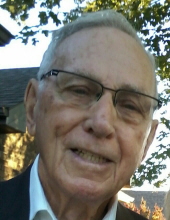 He was a fourth generation dairyman, who started working in the Holstein family dairy in Diamond, Mo. He married Mildred Hosp in 1946. Together they raised three children until her death in 1965. He moved on to work for Foremost Dairy in Paragould Arkansas and Minneapolis and also worked for International Paper in Omaha. He met Peggy in St. Paul and they wed in October 1966. He bought Ewald Dairy in Minnesota where he developed tasty dairy products like Tater Topper, grape juice & ice cream, and Tom and Jerry mix. Later, he owned Fisher Foods soup company in Minnesota. Bob could never be idle. He retired, unsuccessfully, at least seven times, with his last career at Mount Hope Cemetery, which he managed and installed Veterans Park and built a chapel out of an old machine shed.

He led an engaged civic life. In Minneapolis, he started the Zurhah Shrine Horseman in 1978, served as President in 1985 and on the executive board until 1987. His quarter horse Chester was the best barrel racer around. He shared his love of horses with his daughter Tracey and his grandkids. He was a Scottish Rite 32nd Degree Mason and 50 year member of Carthage Masonic Lodge #199. He was also an active member of Chapter T of the Goldwing Road Riders of America in Joplin. He and Peggy enjoyed many cross country trips including, Niagara Falls and the Grand Canyon on their bike and later trike. Finally, he was a school volunteer in Las Cruces NM and as a volunteer for Parker Mortuary.

Bob was idolized as a father and grandfather – teaching the kids how to waterski and fish in the Mississippi, ride horses and motorcycles, drive tractors, and play cards. He was an incredibly healthy man well into his 93rd year, cutting wood, gardening, and spoiling his dogs. His family will remember Sweet Ole Bob (S.O.B.) as snorting in laughter, doing things his way, and always active. A celebration of his life will be held on March 24th at 11 am in the Chapel at Mount Hope Cemetery in Webb City, MO. In lieu of flowers, the family request donations to the Joplin Humane Society.
Posted by Randy at 3:40 AM